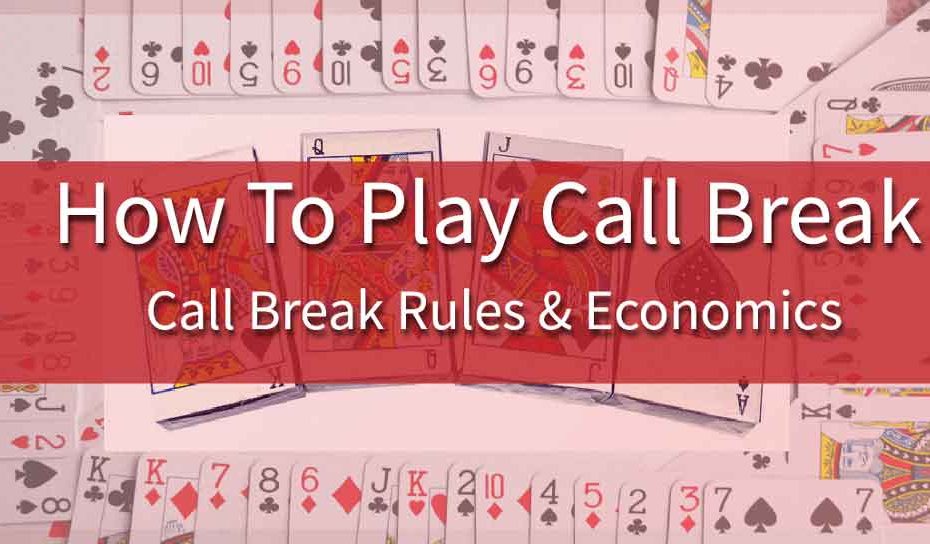 In this step-by-step call break rules for solo, online, and multiplayer, we will teach you how to play call break like a pro!

At first glance, Call Break looks like a complicated card game with many rules. But, I assure you, it is a piece of cake.

When you understand the basic rules, all you need to do is practice. You can practice by playing solo or online.  So, download our free call break card game for android now or play it online on your browser.

Like other card games, if you want to become a pro player, you might need to remember cards and learn to trick opponents. You will learn this skill with experience. So, before you start playing with your friends, we recommend you to practice the rules in offline single-player mode.

With our app, you will become habituated to the rules in no time. Then, you can play the multiplayer mode.

Before we jump into the rules of the call break game, let me warn you. Callbreak has interesting gameplay, so can be very addicting.

These are the main callbreak rules that you should remember.

Why Is The Game Called Call Break?

Call break is a game of collecting the highest amount of points in the defined number of rounds.

Since players receive negative points if they fail to reach their called bet, trying to break opponents’ Call is one of the winning strategies of this game.

If someone gets negative points, it’s very hard to recover. So, in a game, other players often use tricks to break the call of the leading player.

The game is called Call Break because of this strategy. The negative marking feature of the game appeals even to experienced players.

Call break is a 52-cards game. It is played among four players. Each player gets 13 cards each, in each round. It is a turn-based game. In Nepal and some parts of India, the game is played in an anti-clockwise direction. However, these days, the game is also played in the clockwise direction similar to other card games. It is also called call bridge in some part of India.Our call break app uses a clockwise turn.
The game starts when a dealer distributes the cards turn-by-turn to every player. The player with highest points wins the game.
TRUMP CARD: Spade suit is the trump card in every call break game. – A Computer or an Android phone

– Our call break Android app or our online game .
– 30 minute of your time

How to play callbreak game step-by-step: The dealer has to deal the card one at a time to each player until everyone receives 13 cards.re to change this text.

When all the cards are dealt, the player sitting left of the dealer starts the call. Call is the possible number of hands one can win in a round. Players should hide the cards from each other because call break is a game of tricks and deceits.

All 4 players strategically call the number of sets they think they can win in the round. The minimum amount of calls is 1. So, no matter what kind of card you get, you must at least call 1 point.

Remember, if you bet (call) higher, there is the risk of negative points.

After everyone makes their bet, the sum of the call is calculated. If the total call is less than 8, the cards are re-dealt.

Also, if someone didn’t receive a Face card (J, Q, K, A) of any suit, they can ask the dealer to redistribute the cards. The cards are also redistributed if any one of the players doesn’t get a spade card of any rank. The first person can play card of his choice. The following players then should place the same suit card of higher value than the lead card. For example, if the first player throws ‘9’ of Hearts, the next player should throw ‘10’ or higher card of Hearts, and the third player should also throw a higher card of the Hearts, and so on.  If the subsequent player doesn’t have a higher card, he can throw any card. But, the card should be of the same suit.

However, if any player doesn’t have the suit being played, he can throw a spade card. The spade card triumphs over any cards of other suits. Furthermore, if the players don’t have a trump suit as well, they can throw any card of their choice.

When a trick is won, the player who wins the set starts the next bet by throwing a card of his choice. The main objective of each player is to get the most points at the end of 5 rounds. The players should always try to win the exact number or higher number of sets as per the Call at the start of the round.

For example, if a player called 3 on the round, he should win at least 3 sets. Otherwise, he will get a score of ‘-3’. When all the 13 cards are played, one round is completed. Points are calculated at the end of each round. The points are evaluated based on the number of calls they make at the start of the round.

When a round is complete, the points are evaluated and allocated to the players. Whoever gets the highest points at the end of the game, wins the game. The game can be 5 rounds long, or as long as the players want.

Many online callbreak games or apps limit a game of call break to 5 rounds. In Nepal and India, people usually play call-break on festivals like Dashain and Tihar with close friends and family. So, the game can also be played for money.

Unlike other card games, where you can bet unlimited cash, the prize is decided beforehand in a call break game.

The winner takes all the prize money.

The players placed second, third, and fourth have to give money to the winning player. The fourth rank gives the highest amount of cash.

Did you find the game interesting? Trust me, it can be a lot of fun, and a  great time-pass. And, hope you learned how to play call break card game now!

You can play callbreak with your kids, friends, or at a family gathering. The card game is best for festivals. Most of the households of Nepal play call break on Dashain.

If you want to learn more about the game, you can try our online call break and play solo (single player mode).

You can also download our mobile app to play the call break multiplayer version and enjoy it with your friends and relatives.

Our android app has the smartest bot and a great UI. You will get addicted! If you didn’t understand any of the callbreak rules above, let us know in the comments below.